In the production of cooked ham products, the first step in the process involves treating the meat parts with brine after selecting the initial material. In most cases, the brine is inserted by means of brine injectors.

Brine injection involves injecting the required amount of brine very precisely into the meat parts. Some other products undergo brining, which means the pieces of meat are submerged in the required amount of brine where they then need time to absorb it. In both procedures, the subsequent processing of the muscle fiber structure is crucial to the quality of the final product. The effectiveness of the water retention and protein activation is determined here and, concomitantly, the quality of the slice cohesion. In industrial production, two processes are used for this stage of production.

In the case of the commonly known tumbler technology, a big drum rotates horizontally on guide rollers. Flat baffles lying on the inner walls of the container cause the pieces of meat to fall and produce a gentle movement. This movement is also frequently referred to as “rumbling”.

The massage process takes a completely different approach. Here the container has a fixed construction with an internal, rotating shaft.

Large, spiral-shaped paddles are mounted on this shaft and move the product around its axis. Since these paddles move within the meat mass and, unlike the tumbler, there is not just contact between the product and unit at the outer edge, each individual muscle is actively touched. This principle of the vacuum massage system was already introduced and patented in 1986 by Dr. Iyimen, the owner of MYAC Maschinenbau AG. As a result of the close cooperation with Helmut Schröder, the patent was later taken over by Schröder Maschinenbau KG. The company’s current Max massage units are available in sizes ranging from 600 to 6000 kg nominal fill volumes. Massaging particularly established itself as the most effective technology for bone-free products such as traditional cooked ham to the point that it is used by around 70% of the German meat industry today.

Compared to the tumbler, whose fill volume (depending on the design) lies typically at 45–55%, the massage unit achieves 85–90% (Fig. 2). This gives rise to crucial advantages: on the same floor area of one unit, almost double the product amount is processed. What is more, thanks to the high fill level, the headspace above the product is reduced to just 10–15%, which is only one-third of the free, unused volume of a tumbler. Besides the fact that the massage unit processes twice the amount of meat, the vacuum is built up in a considerably shorter time and thus saves on costs. During operation, the vacuum in the container is continuously at 50 mbar (less than 5% of the normal pressure or atmospheric pressure). The thermal plate used for cooling allows product temperatures of up to 1 °C during operation. Thanks to the 90% fill level, the product has a large, effective contact surface with the cooled vessel container wall. Due to the strong mixing action of the paddle, the temperature in the interior of the product is quickly and effectively reduced. 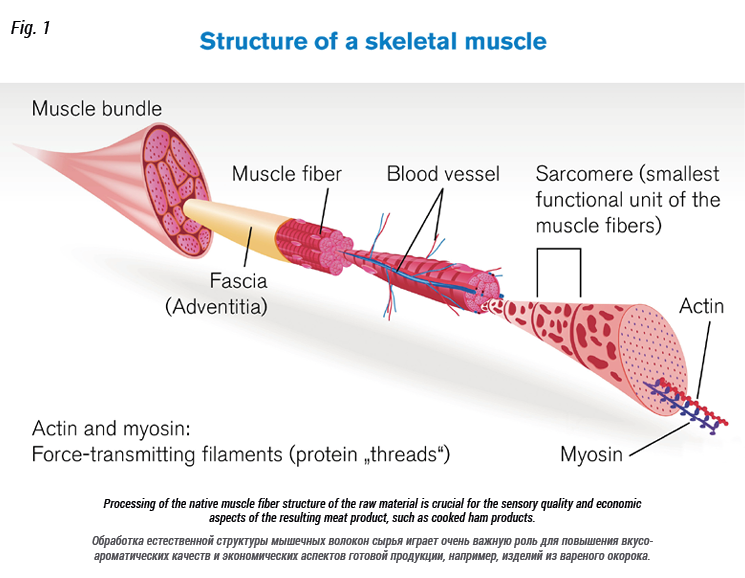 In contrast to the passive curing technology of a tumbler, the brine is incorporated actively into the muscle by a Schröder Max massage unit. Technologically speaking, the salt in the brine cause the muscle fiber to swell (Fig. 3). This is intensified by the vacuum in the MAX massage container. The high pressure achieved by the large paddle and the above-mentioned high fill level provides a direct, active input of mechanical energy right into the core of the individual muscle. At the coldest possible temperatures of below 2 °C, an intensified solution of fibrillar proteins is produced, which is also usually called protein activation – the key to optimal water retention as well as a higher yield at the slicer. In practice, a distinction is made between the extramuscular and intramuscular slice cohesion in the finished product.

The demonstrably better results achieved using massage technology show that products showing higher protein activation within a shorter period of time, so better product yields can thus be achieved. The increased slice firmness of the product can be measured by a higher slice yield.

2021-07-26
Previous Post: Reclosable, Completely Recyclable MAP Solution for Sliced Meat – Swiss Manufacturer Bigler is Causing a Stir at Retail with FlatMap®
Next Post: Agroprodmash: as How that Works