IFFA 2019 showed again that food processors are facing more and more pressure from the cost side and that efficient mixing and emulsifying solutions are the key to their success. This way, the processor gets from the deep frozen and fresh raw material to the finished fine emulsion in a very cost efficient way. Several components can be linked to a continuous production line.

The production process starts with the reception of the raw material. Deep frozen blocks are manually unpacked on a table and conveyed by belt, and fresh meat is loaded by hoist elevator to the grinder.

The following step is the mixing. Ground raw material is directly loaded by a screw conveyor or indirectly via bins to the mixer. With the INOTEC VarioMix a unique technology is offered which sets the standard in terms of mixing speed, homogeneity and mixing quality. 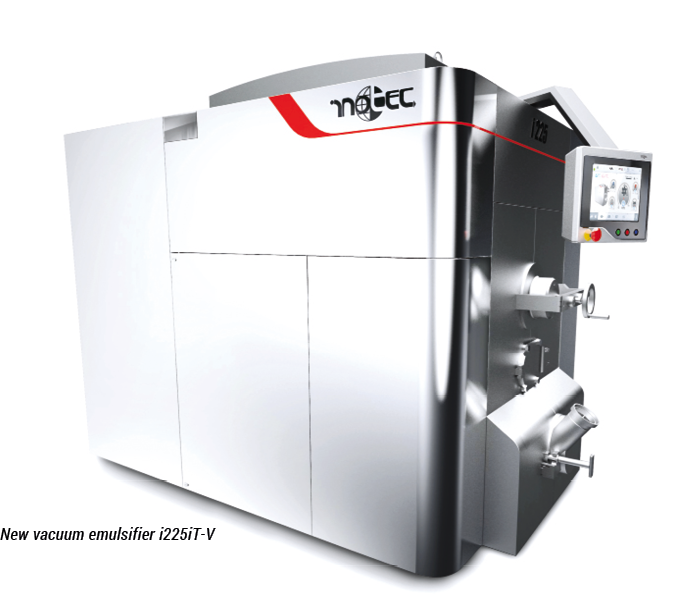 Dry ingredients may be added to the blend by special devices or by bins and the liquid ingredients (water) are added by dosification systems. For a temperature regulation of the pre-blend ice or hot water can be used.

For the pre-blends the mixers with intermeshing paddles in two different height levels are an effective and budget-wise interesting alternative. This configuration mixes the product over the complete length of the mixer. The mixing geometry is very efficient (short mixing time for an homogeneous blending) because the mixer is narrow but long. This way, the paddles are mounted very close to the shaft and there are no dead spots which are caused by long paddle arms. A new vessel and paddle geometry are optimizing the weak point of this mixer type, the “unloading higher viscosity blends”. 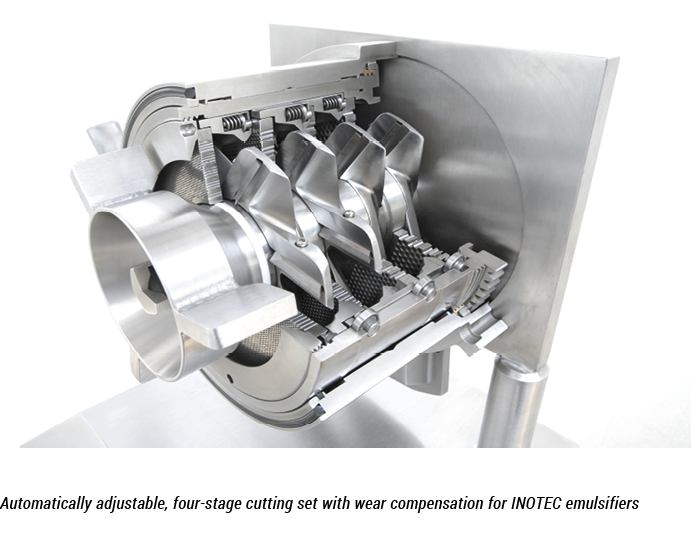 To work with the subsequent emulsifier in a continuous way it is the best to work with two mixers: one mixer is loaded or unloads and the other mixer is working to process the pre-blend. Alternatively a big buffer silo with a feeding pump can be used after a big mixer. This makes a fast unloading possible and the mixer is quickly available for a next batch. This way, a separation of the processing area and the stuffing area may be also realized. A pump conveys the pre-blend through a closed pipe-line system to the INOTEC emulsifier which is in the filling area, closed to the stuffers.

In order to work cost efficiently and continuously, a modern production line uses INOTEC emulsifier. To produce fine emulsions, the INOTEC emulsifiers are also available with an entry hopper (this way, the emulsifier can also be placed under existing bowl-cutters). In continuous automatic processing lines an inline emulsifier is often the right choice. The product is conveyed by pump through a closed pipe-line system in a hygienic way to the emulsifier. The pressure and the product outlet temperature are controlled via the feeding speed of the pump.

Emulsifier with process vacuum are working with an adjustable vacuum level prior to the emulsifier set-up and are also fed by a pump. These machines have an integrated vacuum mixer and a sophisticated feeding system of the emulsifier cutting set. The proven system of INOTEC for the best product binding, consistence and texture and also the best machine performance are the systems with up to five modular designed emulsifying stages, working from coarse to fine. Newly presented on IFFA 2019 is the feature of a variable speed of the main motor for vacuum emulsifiers.

The brand new vacuum emulsifier is used for obtaining an extremely compact product with best texture and bite. These parameters are essential especially for sliced products as the cross cutting image is free from air bubbles and the compact and firm logs are behaving much better in any slicer.

As last point it needs to be mentioned that a production line is not only the arrangement of different machines but an intelligent system. The brain of this system is an integrated central control with recipe administration, flexible processing steps and data tracking possibilities (for traceability) which allows the best use of the high level of automation.

On IFFA was shown a multitude of possibilities and visions from INOTEC in terms of INDUSTRY 4.0 to use the control features and to evaluate the processing parameters in the best way. 