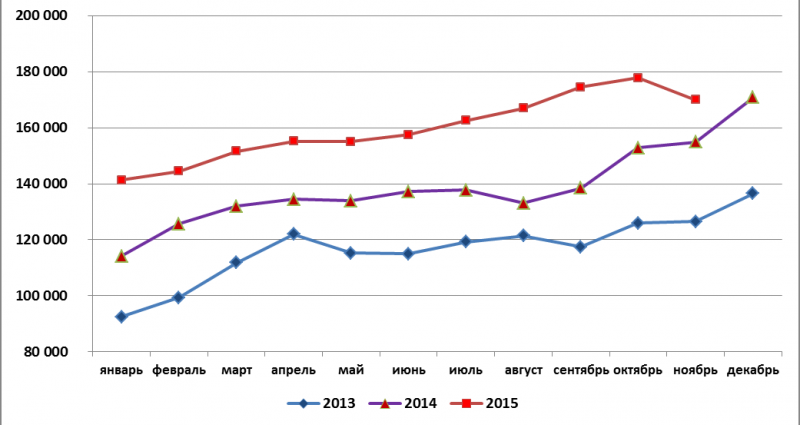 1,8 MILLION TONES OF PORK MEAT HAVE BEEN PRODUCED IN RUSSIA FOR 11 MONTHS IN 2015

170 thousand tonnes of pork meat (including offals) were produced in Russia in November 2015 – this is 4.4% less than the previous month, but 9,8% more than November 2014. 17,6% more pork meat (including offals) have been produced in Russia for 11 months in 2015, which is more than the similar period of 2014. “The minimal volume of recorded manufactured pork meat in January 2013 was 92.5 thousand tonnes,” said SoyaNews; the highest production volume was recorded in October 2015 with 177.7 thousand tonnes.  In general, the volume of pork production in Russia (and it is clearly demonstrated by the graph) is constantly increasing from year to year.

Structure of pork meat production in districts  (based on 2014)

According to statistics, slightly more than half of the pork is produced in the Central Federal District, says SoyaNews

2016-01-20
Previous Post: THE FEDERAL AGENCY FOR FISHERY (ROSRYBOLOVSTVO) CREATES FAR EASTERN FISH CLUSTER
Next Post: FOUR MILLION TONNES OF POULTRY MEAT AND BY-PRODUCTS HAVE BEEN PRODUCED IN RUSSIA FOR 11 MONTHS IN 2015