Lima, a World of Separation

Since the time of its incorporation in 1981, LIMA is a company which has specialized itself in the design, manufacturing and sales of meat-bone separators, deboning and desinewing machines for the poultry, pork, lamb, beef and fish industries.

The company is located in the town of Quimper in Brittany region, in the western part of France. Equipped with the most up-to-date machine tools and facilities, LIMA keeps on innovating new mechanical separation technology. Its factory, in addition to manufacturing, offers testing facilities in its modern laboratory.

Numerous LIMA machines models, with separating capacities ranging from 100 to 20.000 kg/hr (220 – 44,000 lbs), corresponding to the highest EU and US quality standards are at 95% exported worldwide through a team of distributors servicing over 100 countries on 5 continents.

For those not involved in the poultry or meat industry, the word LIMA would certainly evoke the magnificent capital city of Peru.

However, since its modest beginnings in the 80’s, LIMA which literally in French goes as Les Innovations Mécaniques Alimentaires (Mechanical Innovations for the Food Industry) rapidly made a name for itself to become today one of the most acknowledged world leaders in its field.
We may say that mechanical separation is their life at LIMA as they are 100% dedicated to this. Their job is to separate the hard from the soft using mechanical means. 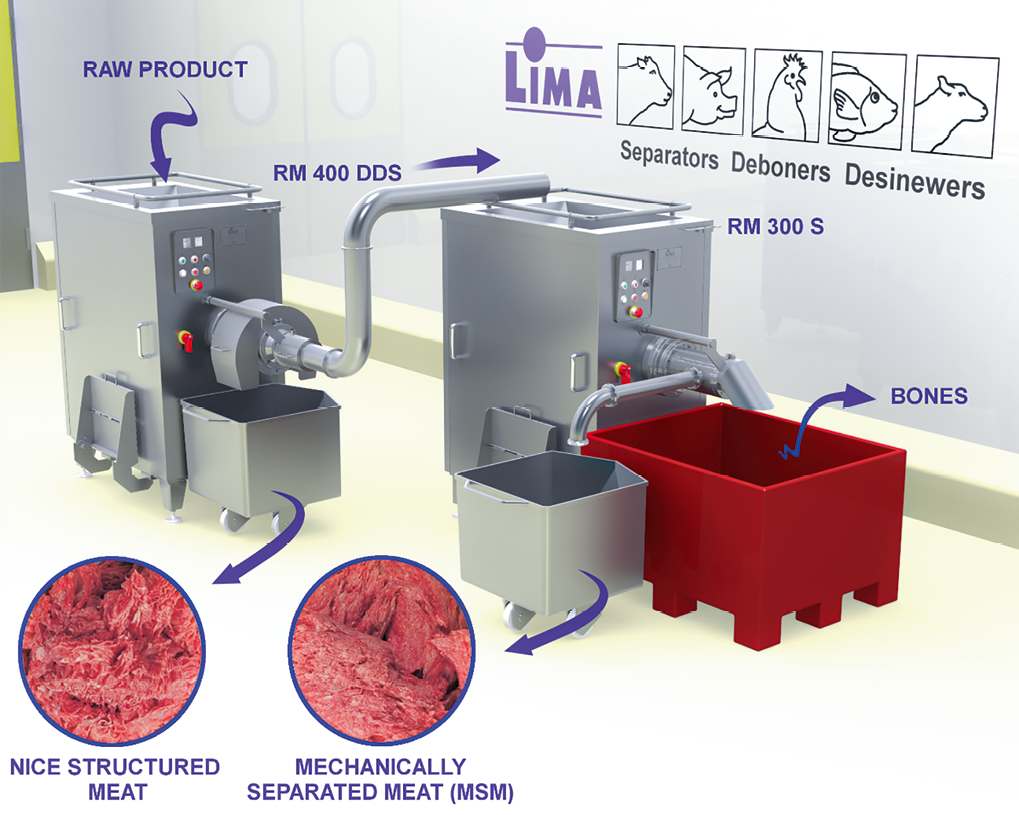 The purpose is to maximize the value of co-products, such as, typically: wings, necks, drumsticks, as well as poultry carcasses after automatic cut-up lines, which would otherwise be discarded or sold at a very low price, as it would be virtually impossible to recover all this meat from the bones manually. The separation of the meat from the bones is performed by using a rotary auger into a filter. The machine gently pre-crushes the bones and as the auger pushes the raw material through the filter, the pressure is easily regulated by adjusting the distance between two conical parts at the bone exit of the machine. A graduated device enables the operator to know exactly in which pressure adjustment the machine is. As the pressure increases on the raw material, it allows extracting through the openings of the filter the soft part, the meat, whereas the hard parts, the bones, continue their way to the exit of the machine. The first and most common use of such separated meat, referred to as Mechanically Separated Meat (MSM) is the production of fine paste sausages such as Frankfurters for instance.

This helps avoiding a considerable amount of non-desired side effects of the animal production.

This allows a very significant amount of meat protein which is transformed into sausages or other meat products to be offered on the market generally at a very affordable price. In this sense, LIMA machines are serving a “green oriented” attitude.

LIMA has always been a prime mover in the development of new separation technology and filed several international patents.

These developments enable LIMA to provide their customers with a full range of:

LIMA always strives to develop equipment which actually fit its customers various separation needs, has standardized its range of equipment allowing most separators to be changed over into deboners or desinewers and vice versa in a quick, easy and effective way.

Other specific applications have been developed throughout the years with its customers, and not only for the human food industry but also the pet food industry or collagen industry, for instance:
Pork fat – skin separation, the good quality fat being reused in the formulation of further processed meat products and the defatted skin being used by collagen manufacturers.

Cartilage separation out of pork tracheas or beef gullets, such cartilage having various applications in the cosmetic and pharmaceutical industries.
Other soft bones coming from fish central bones after filleting or fish flaps can also be separated from the fish pulp, such fish pulp being used for the formulation of further processed products for human or pet food consumption.

LIMA’s expertise and experience allow the company to develop and provide its customers with deboners for much harder bones such as pork or beef.
This contributes even more to the already established reputation of robust, user friendly and efficient separation equipment LIMA has.

It would take a very long article to enumerate all the separation capabilities of LIMA and what LIMA’s customers actually separate, some animals being sometimes more exotic than those already mentioned. LIMA had estimated back in 2014 that more than 1 500 000 metric tons of separated meat were processed every year on LIMA separators, and this number keeps growing on. Definitely, LIMA has a world of separation!

LIMA actively participates in more than 35 different trade shows a year, many of them being specialized in the poultry, meat and fish industries, such as IFFA in Frankfurt, ANUGA in Cologne, IPPE in Atlanta, SIAL in Paris, SEAFOOD PROCESSING shows in Brussels and many VIV shows in Europe, Asia and in the Middle East.

In particular, LIMA will exhibit at AGROPRODMASH show in Moscow from October 07th to 11th, booth No. 21C35, Pav. 2, Hall 1.
Please feel free to come and meet us on this occasion to discuss your separation needs.

2019-09-24
Previous Post: Processors Around the World Looking at Automated Opportunities. Labor Shortage Advances Automation
Next Post: Central de Carnes Premium Joins Forces with El Corte Inglés to be the First in the World to Implement the GGN Label (GLOBALG.A.P.) for Livestock