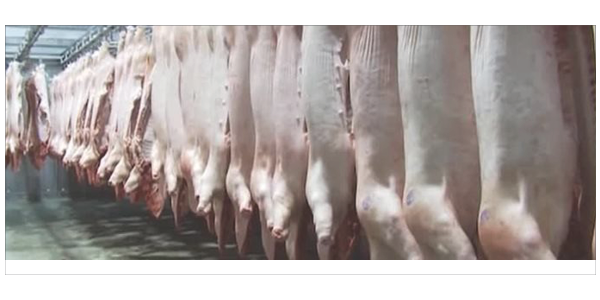 A NEW LIVESTOCK BREEDING COMPLEX IS UP AND RUNNING AT FULL CAPACITY IN SAKHALIN OBLAST. IT WAS BUILT IN ONLY SIX MONTHS.

Now the region is fully provided with domestically produced meat.

The factory, which is one of the largest plants in Sakhalin, has been built in only six months. The state-of-the-art livestock breeding complex is located in the open field. This is the first plant built in “Yuzhnaya” territory of priority development. The construction works were done in two stages. The last stage was completed in October, 2017. Now the farm is working at full capacity. 1000 pigs are slaughtered every week here. The experts plan to use vacuum packing to keep the meat fresh for more than 10 days.

“We are already vacuumizing some of our products, however, the dressing capacity is still not enough to process the entire output produced by us. In the future we plan to supply up to 50 percent of the products manufactured by the pig complex in a dressed form,” Alexey Pahomov, CEO of the pig complex said.

Chilled pork was in short supply in Sakhalin in the past. Small quantities of this product were supplied only by the local farmers. The situation changed dramatically after the new complex began working at full capacity. Currently, the new plant supplies up to 110 tonnes of chilled meat to the market. Moreover, the price of 1 kg of pork fell by more than 100 rubles.

“Today, the entire price policy is regulated by us because the supplier has signed an agreement with the government of Sakhalin Oblast to ensure reasonable and affordable prices for consumers. No more than 300 rubles, depending on the type of meat,” Mihail Kuzmenko, Minister of Agriculture of Sakhalin Oblast said.

The Sakhalin market was short not only in domestically produced pork, but also in chicken meat. This problem also has been solved. Currently, the only poultry plant on the island also increases its production volumes. Recently, a new poultry house has been put into operation in the plant which will house 90 ths hens. It’s three times more than before. The modern equipment reduces the electricity costs and increases the egg production of the layers. This helps keep the price of the products low. Soon a new facility for 45 ths hens will be built here. In the near future, two new complexes for the production of eggs and chicken meat will also be built on the Kuril Islands.

“Today, we are able to satisfy the demand in eggs in Sakhalin Oblast. We already have an egg carryover in our warehouses. When the new poultry house will be put into operation in 2018, we plan to produce 120 million eggs per year. This volume will be enough to completely satisfy the demand,” Sergey Dobrelya, Director of the poultry plant said.

The development of the agricultural sector on the islands led to the reduction in prices of vegetables. For example, the price of cucumbers was reduced almost by half to the average of 100 rubles per kg. During the summer, the price was even lower. Potatoes and cabbages also became cheaper.

“The Federal Veterinary and Phytosanitary Monitoring Service which monitors and controls the import said that the shipments of vegetables to Sakhalin were significantly reduced. Today it’s the other way around – our producer delivers cucumbers to the main land,” Inna Pavlenko, Minister of Trade and Food of Sakhalin Oblast said.

The large project for the creation of “Yuzhnaya” territory of priority development will allow Sakhalin Oblast to switch to local agricultural production. And it will also create approximately 500 jobs.