The idyll of manual portioning is long gone. High-pressure portioning, which has been the standard in the industry for decades and is still the most prevalent method, is dictating meat properties. Protein mass structure and texture is partially destroyed during the production process at the cost of the end product’s quality. Marel Townsend Further Processing’s low-pressure portioning technology puts the end product’s quality at the centre; the end product dictates the technology and, thus, the method used. The original protein mass structure and texture of the end product is respected with an optimum, client-specific end product, produced in an optimal process as the end result.

Globally, the popularity of convenience products is still increasing and both producers and consumers set ever-increasing requirements to end products. Local customs, flavours and shapes are important and in more and more markets there is a focus on healthy products and/or products that approximate a traditional home-made product, for example. Apart from quite a number of set classics, the trends come and go faster and faster. 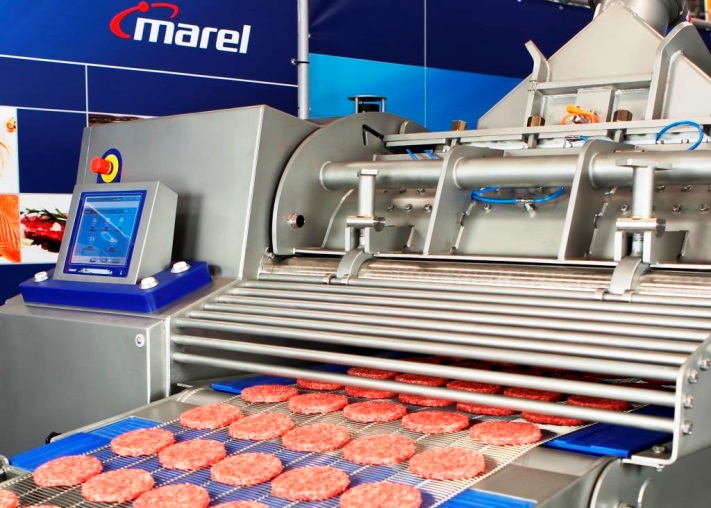 This and the fact that a lot more is possible, both technologically and technically, in 1998 formed the basis on which Marel Townsend Further Processing started developing  completely new portioning technology. After intensive fundamental technological research, it became clear that low-pressure portioning was the right way to go. By now, low-pressure portioning is a known method and the technology developed by Marel Townsend Further Processing is used in various machines and is under constant development while being supported by further research.

The importance of good texture

What makes for a good end product is not easy to determine, can vary per producer and of course also depends on the flavour and local product requirements and expectations. However, some characteristics always play a part. For instance, the origin of the meat and the composition of the meat dough are important. Moreover, the portioning process itself is also essential; central to this is texture. Texture determines to a large extent the sensory qualities of a product, such as bite, cohesiveness and tenderness.

Maintaining the structure of the meat is the key to success in maintaining the texture. The influence of temperature and viscosity is enormous and, as such, it is vital that these parameters are controlled during the portioning process.

Marel Townsend Further Processing researched the functional properties of meat masses in relation to temperature which has brought new insights and options in meat processing technology.

This graph visualizes a few meat mass profiles. The x-axis measures meat mass temperature, the y-axis is a measure for stiffness. With a change in temperature, the overall rigidity (y-axis) changes as well. The overall rigidity is a general measurement, but it holds many ‘secrets’. For instance, relaxation, adhesion and elasticity of the meat mass are factors that also determine the quality of your end product.

Meat doughs portioned with high-pressure drum/mould systems are to be found in the colder range (more to the left). Low-pressure (RevoPortioner) portioning can handle warmer masses, more to the right on the x-axis.

So why do most processors produce at a relatively low temperature? High-pressure portioning equipment – plates or drums with knock-out cups – only supports a product at the sides. Therefore a stiffer, thus colder mass is needed to prevent undesired premature ejection. Prematurely ejected products have a damaged appearance which results in downgrading products, rejects, rework and loss of raw materials.

With the technological understanding and knowledge of the raw material aspects in mind, Townsend Further Processing’s low-pressure portioning technology provides processors with the flexibility to meet the optimum processing conditions for the preservation of the initial meat structure. It gives more room to realise the production of a larger variety of end products (e.g. tenderloins, chicken Kiev, whole muscle products, such as schnitzel, products with inclusions and 3D-products, such as meat balls or Ćevapčići).

Furthermore, portioning at a higher temperature also has financial advantages. The change in enthalpy is big; moving from a liquid to a solid state requires a lot of energy. Processors can save a substantial quantity of coolants in the meat preparation process (compared to high-pressure portioning). When products move to the cooking process, they also contain less frozen water; melting ice-crystals is energy consuming.

Texture is a very decisive quality aspect of an end product. The processing temperature has substantial influence on the texture. Colder meat dough contains more ice crystals and is more rigid than warmer dough. More force (a higher pressure) is required to pump the meat and fill the moulds. Thus, in order to flow through the pump and into the moulds, the frozen structure is disrupted. This has a destructive effect on the muscle structure and cells and influences the perceived and measured texture of a cooked product. Portioning experiments at various temperatures show (for the measured texture after cooking) increased loss of hardness (initial bite) and increased loss of cohesiveness with a colder meat dough. 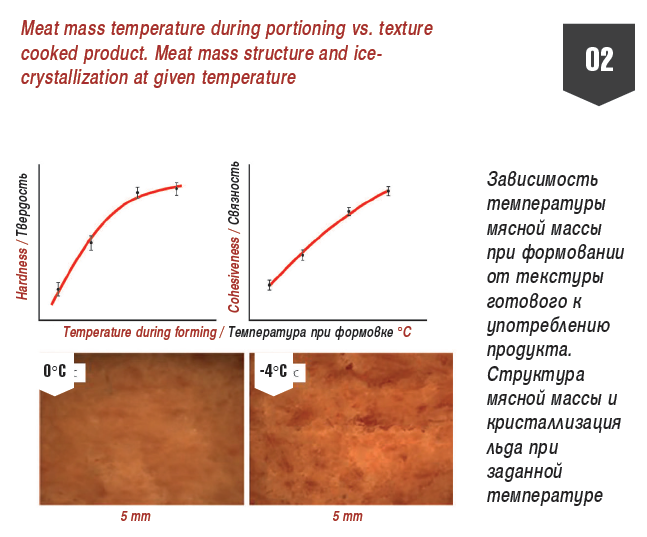 Many meat production companies have sensory panels evaluating the texture or bite of cooked products. A texture analysis can also be carried out with a so-called ‘texture profile analysis’ (TPA). This can predict the perceived texture of sensory panels, avoids subjectivity, and is more accurate compared to sensory panels.

However, TPA does not indicate whether the product is as palatable as desired; sensory evaluation does. For the development of (portioning) equipment and processes, TPA assists in making the right choices for the principle of process, capabilities, functions and settings of the equipment.

An example of connecting sensory results to TPA is to check compression force of the product. For this a sample is measured with a probe recording the forces when a product is compressed. The probe compresses the product twice or more, the forces measured are then translated into predictive numbers for the perceived texture by the sensory panels. Some sensory parameters of the end product that can be measured are cohesiveness, springiness, gumminess, chewiness and resilience (see image 3). 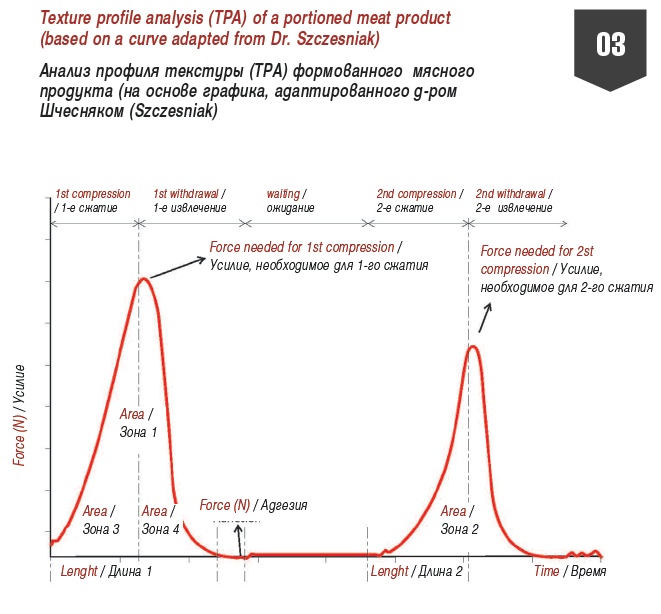 Another important aspect of portioning technology is the shape of the end product. A producer strives for consistent end products that all have the same shape as much as possible and show no faults. Shape consistency is desired even for home-made style products.

Some common defects in portioned fresh products are: lips, knock-out cup markings and rough edges (product contour sharpness). All these defects are created by interactions between the meat dough, equipment and process.

That is why understanding meat properties and behaviour was a key goal in the development of the RevoPortioner. Common end product defects were eliminated or at least reduced to a minimum. An important new technology that plays a significant role is the rotating drum made of breathable, sintered material.

Lips occur because of the relaxation properties of meat, under influence of portioning pressure and filling accuracy. The technology incorporated in the RevoPortioner controls the relaxation of the meat. Lip creation is therefore prevented. High-pressure formers produce lips. Lips have to be scraped off the product, valuable rework is required and more meat dough is lost.

High-pressure formed products have a characteristic appearance with rough edges. This is caused by leakage between the forming plate and the upper and bottom plate. The pressure squeezes the meat between the plates and by tightening the plates together this can be limited somewhat, although this does increase wear. The sintered material drum and its sealing plate are well-matched and less pressure is needed. This gives the portioned product an unmatched product contour sharpness.

The rotating drum of the RevoPortioner supports products at the bottom and the sides of the mould. This allows for a slightly higher processing temperature.High-pressure formers with plates or drums cannot do this as the products would fall out prematurely and in an uncontrolled manner, which requires rework and causes waste. The sintered material of the drum makes gentle and accurate ejection possible using only air. This improves the quality of the products as knock-out cup markings do not occur. Water spraying or heating the cups to disguise ejection problems is not necessary.

There are also shape aspects for cooked products that are of importance. It is important to know that meat always shrinks during cooking. However, producers want to avoid shrinkage as much as possible. Product shrinking is caused by shrinkage of the proteins in longitudinal and transversal direction. Some proteins shrink more than others. In general, chicken meat shrinks less than beef because of the difference in protein type.

In research, descriptors are used to determine the shrinking characteristics and performance of meat masses and what the effect of the portioning process is on the end-product. Using a camera, the geometry of a sample product is recorded before and/or after a treatment to assess the portioning and/or cooking process.

Shearing of the mass

Delicate treatment of the meat mass is of great importance for shrinkage control of the end product. Energy input by friction (shear) in the meat mass must be prevented. Meat transportation means that e.g. pumps should be selected carefully.

For example, horizontal feeding augers transportation is based on shear and friction and must therefore be avoided. Positive displacement pumps perform much better, as this principle is not based on shear and friction. Shear forces also cause a smearing effect where the white-coloured fat particles are sheared over the red-coloured proteins, thus causing a pink blur. The initial red/white particle definition is lost.

Weight accuracy and giveaway play an important role in reducing costs and improving the efficiency of automated weighing systems, especially when products are sold as piece count. 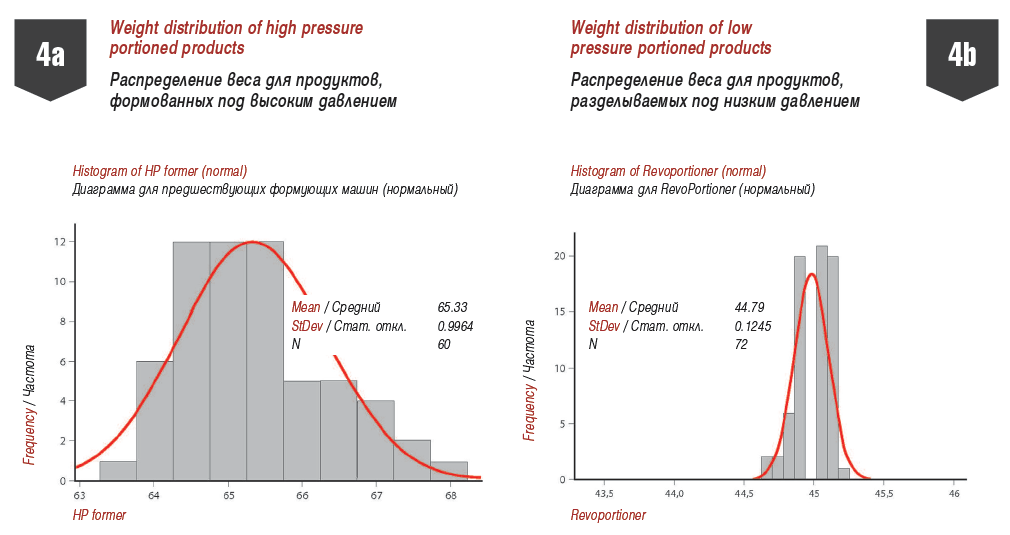 At Marel Townsend Further Processing, years of intensive research lead to the technological knowledge of the functional properties of meat masses, their behaviour during portioning and the consequences of that portioning for various aspects of fresh and cooked end products. This knowledge was successfully translated into a new low-pressure portioning technology as applied in the RevoPortioner.

It enables effective portioning at higher temperatures with a lower pressure and therefore with minimum damage to the original meat structure and texture. It offers processors a wider operational window and allows the production of a wider variety of end products that have a consistent shape and weight, show little defects and are produced at a lower price per kilo product.

For more information on Townsend Further Processing, go to marel.com/townsend