“THE MARKET IS CLOSED” OR HOW IS POULTRY FARMING IN THE KALININGRAD REGION DEVELOPING?

Eggs and chicken meat are the products which are actively consumed by the citizens of the town of  Kaliningrad. There are only two manufacturers of this industry in the region: “Baltpticeprom” and “The Guryevskaya Poultry Fram”. Due to the economic blockade, monopolists expand their business in order to meet the needs of the region. 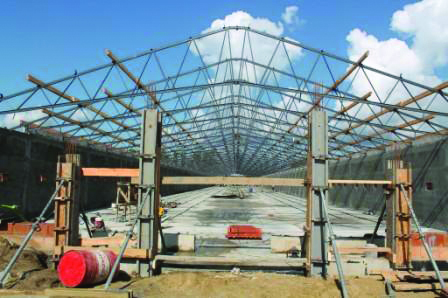 According to the regional Ministry of Agriculture, the total amount of birds (ducks, geese, turkeys, guinea fowl, and others) in all categories of farms in the region is 1.95 million. In general, animals from private farms are bred to meet the needs of the owners while large enterprises breed animals to meet the needs of residents of the city. The Guryevskaya Poultry Factory, which has been working since 1974, provides egg supply for the region. On 1st August 2014, the factory produced 99.1 million eggs. In 2013, the volume of its production amounted 146.9 million units, i.e. 70% of the regional market. The total egg demand of the population in the area amounted 270.2 million units last year, so we needed nearly 120 million eggs more. Belorussian poultry farmers help to fill the stock of eggs.

“There are 650 000 birds at the poultry farm now.” says Yury Skalin – the executive director of The Guryevskaya Poultry Factory. “Eggs are realized only on the domestic market. Sanctions did not affect the price growth. A first category egg is 33 Russian kopeks. This price is “tied” to the Belarusian cost because there are too many factories there. They use government subsidies and drive large volumes of our market at dumping prices.”

In order to meet the needs of Kaliningrad market, the factory has reconstructed and expanded two poultry houses to accommodate 120 thousand birds. These new facilities should be opened at the beginning of next year. Chicken livestock has to be purchased in the Czech Republic and Germany. One bird costs 0,6 euros. Despite the considerable production costs, there is support from the Ministry of Agriculture – subsidies and compensation of 2/3 interest rate on loans.

Besides the production of edible chicken eggs, there is a farm in the region which is engaged in growing quails eggs. The aviary located in the village of Mozir in Pravdinsky district has been the only one in the area since 2010.

“In our farm, we have about eleven thousand quails, five thousand laying hens, and the others are either young or kept for fattening,” says Mr Kirill Korotkov who is an entrepreneur. “In 2013, we released forty-five thousand packs of 18 eggs in each to the market (810 thousand pieces – according to RUGRAD.EU). Now the retail price for the package is 48 roubles. Our products are delivered to the trade network of the area where the prices reach 75 roubles and it is almost impossible to control the margins.”

A small aviary is located on 16 acres of land. The administrator intends to build a large farm for 45 000 laying hens and up to 60 thousand birds for fattening. Mr Korotkov is reconstructing some old calf-houses now. The government helps the entrepreneur with subsidies and compensation of the interest rate on the loan. The contractor stated that he needed to borrow 15 million roubles for the construction. The entrepreneur started this economic activity with a credit for private farming, and later participated in the state program “Development of Family Livestock Farms on the Basis of the Peasant Farms for 2012-2014”. He has received the first tranche of 7,1 million roubles under the terms of the programme (60% of the funds has been received by the state under the programme for creation and development of peasant farming (KFH). The entrepreneur expects to meet the needs of the region for quail eggs by producing 1.5—2 thousand packs per day or it means twenty-five thousand pieces, in other words, today he is able to cover only 8.8 percent of customers’ needs. The deficit is about 8.5 million quail eggs. The entrepreneur notes the lack of feed for poultry and its high cost as the main problems of this branch (in contrast to the production of The Guryevskaya Poultry Factory- part of Dolgov and K Holding, which carries out grain preparation on their own).

“Due to the high growth rates that are happening now,” explains Mr Korotkov, “feed prices are rising, with the exception of grain, which is enough in this area. A paradoxical problem, which should not exist, is the demand for fish flour. Sunflower, protein supplements and vitamin complexes are rising rapidly and all thеsе must be delivered in the area. Packaging is getting more expensive. Production costs аrе rising and the prices cannot be increased because the purchasing power of the population is declining,” he explains.

An important problem to be solved by young farms is the reproduction of poultry. Despite the fact that quails can be reared at home, the problem is the import of hatching eggs.

“Until recently large quantities of frozen chicken were imported from abroad,” says Mr Alexander Golovteev, who is the head of the Baltpticeprom program for birds, “this meat went exclusively to processing and now meat processors are in a very difficult situation. We did not expect these sanctions and had to close the processing market until 2016. In order to do that, we have to produce 50 thousand tonnes of chicken meat per year. Currently, we produce about 20 thousand tonnes per year (70 roubles  per kg – according to RUGRAD.EU). We fully cover the needs of our population and such problem does not exist here. Despite the overall  deficiency, 40% of poultry meat is transported and sold in Moscow and Central Russia.

At the beginning of 2014 “Baltpticeprom” had 30 hen houses (40 thousand chicks in each – according to RUGRAD.EU). Today, there are 43 thousand. The enterprise is going to increase the number of hen houses up to 63 in a year. Poultry farms are located in Kumačëvo on 40 hectares and in Bagrationovsk on 250 hectares plus two more sites for birds are in the process of acquiring. Construction of a poultry house costs 20 million roubles. And a whole platform for 20 poultry houses – 500 million roubles without the cost of services in connection to the electricity grid. The challenge is import to be completely displaced in 2016.

“The major problems that we face in the first place,” continues Mr Golovteev, ”is the problem of financing. The Ministry of Agriculture means waiting for money and very serious procedures. We need a real financing – 100% compensation rates fot loans. Secondly, if we make such efforts for meat production, we want a ban on exports of feed grains from the area to stop its uncontrolled export and avoid importation from abroad. It would be desirable that this fine crop which we have in the area this year (400 thousand tonnes of grains while the demand of the region is 220 thousand tonnes a year – according to RUGRAD.EU) to be delivered to stock and poultry breeders.”

The annual demand for poultry fodder of “Baltpticeprom” is 30 thousand tonnes. Today, we are buying bird fodder for 6.8 thousand roubles. According to the head of the enterprise, grain producers sell their goods to clients and places where they can get the best profit. So many companies are focused on grain export taking advantage of VAT refund. Moreover, the Ministry of Agriculture even payed 500 roubles extra per tonne of exported grain last year.

In addition, the company’s expansion of platforms for bird houses solves a number of other strategic objectives. So, a new slaughterhouse is opening in December (the supplier of the equipment is “Bauer Technics” from Czech Republic). An incubator with a capacity of 32—34 million eggs is going to appear in Bagrationovsk in the middle of 2015. It is supplied by the company “Hatch Tech” from the Netherlands. The aim is to avoid parental livestock purchasing. At the moment “Baltpticeprom” is forced to buy eggs with chicks from the Netherlands, Spain and Poland. In case of interdiction, the enterprise has already signed contracts for egg delivery from Belarus. The total amount of Baltpticeprom programme for poultry production development is designed and calculated for 7 billion roubles. The Ministry of Agriculture reported that target federal and regional programmes for poultry development did not exist. 