The grand opening at Prologis Park Bratislava, was marked by an official ribbon-cutting ceremony which was attended by Ben Bannatyne, managing director, Prologis Central and Eastern Europe; Stefan Ranstrand, President and CEO of TOMRA; Dr. Volker Rehrmann, Executive Vice President and Head of TOMRA Sorting Solutions; Martin Hypky, TOMRA Sorting Solutions’ Local Manager and Operations Director Food; and Senec deputy mayor Jarmila Repassyova. In addition,more than 200 TOMRA personnel, city officials, media, employees and distinguished guests attended the ceremony, which was followed by a tour of the facility and a demonstration on many of TOMRA’s sorting machines such as the new Blizzard.

“This industrial and logistics park, located in Senec, has a major influence on employment rates in our city, and we welcome every new addition, especially that of such a technically-advanced company, Norwegian TOMRA Systems ASA,” said Repassyova. “Senec cares deeply about the creation of new jobs and work opportunities for all our people and TOMRA will bring many new job opportunities to the area. We are looking forward to our co-operation with TOMRA Sorting Solutions, and we anticipate that it will also bring sophisticated technologies and an advancement to the corporate culture in Senec.” 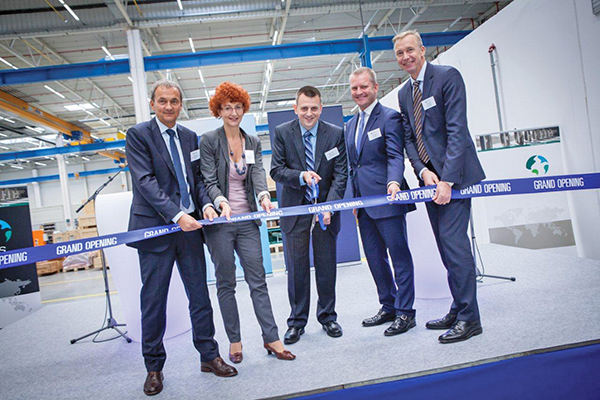 TOMRA creates transformative sensor-based solutions for optimal resource productivity in the fields of reverse vending, compaction, recycling, mining, food and specialty products. TOMRA invested more than €10 million into this new Class-A building, which will house more than 200 employees and function as a distribution centre for the recycling, mining and food sorting businesses to supply Europe, The Americas, Africa and Asia.

“This facility will become the main production centre for TOMRA Sorting Solutions,” Ben Bannatyne said. “In addition to its modern technology and flexible design tailored to TOMRA’s specific needs, it meets strict environmental standards and thus reflects our client’s philosophy and values.”

“We are very proud of our new facility, which is equipped with the most modern technology and incorporates sustainable solutions such as LED lighting, which is in line with our company’s mission to lead the resource revolution. The €10 million investment not only provides us with a state-of-the-art production and distribution facility, it also provides much-improved work areas for our people as TOMRA recognizes its continued successes is down to the hard work and commitment from its employees,” said Martin Hypky.