PRODUCING THE PERFECT SEAFOOD MIXTURE, LIKE ANY BLENDING PROCESS, DEMANDS GREAT SKILL IN THE SELECTION AND SOURCING OF INGREDIENTS, AND ACCURACY IN MEASURING THEM OUT. SEAFOOD EXPERT CABOMAR CONGELAS HAS FOUND THE MIXING ACCURACY IT SEEKS IN A SPECIAL PACKING LINE USING TWINNED ISHIDA MULTIHEAD WEIGHERS.

Cabomar, based at the port of Marin in Pontevedra, Spain, offers a wide range of services connected with the manufacture, storage and commercialisation of frozen seafood products. The company’s knowledge of different shellfish and crustacean species, and its strong links to fishing fleets and freezing plants in the world’s major fishing grounds enable it to select from different combinations of ingredients to produce any one of a range of different seafood mixes that are not just of high quality, but also consistent in taste and texture.

A wide range of ingredients, some single species, others reliable pre-mixes, arrive frozen at Marin. Once the Cabomar experts have worked out which combination to use in order to produce the desired result, the ingredients are fed into a packing system that includes a pair of identical Ishida 16-head weighers, specially adapted to combine them with great accuracy. 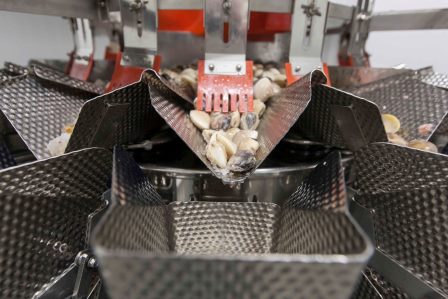 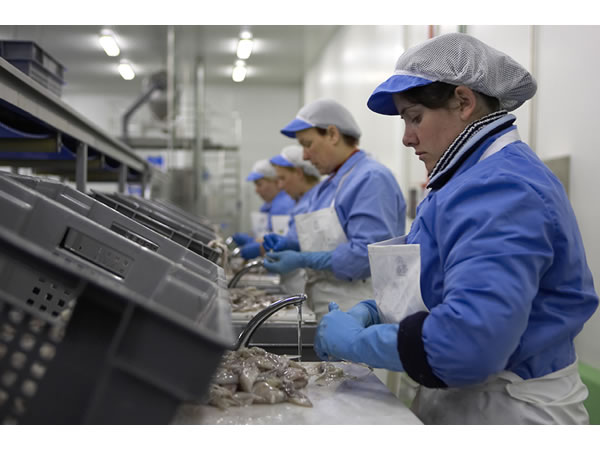 A MUCH RELIED-ON AID TO COOKERY

“These seafood mixes are very widely used in Spain,” explains Enrique Freire of Cabomar. “They can be added to rice to make Paella, mixed with a vinaigrette to produce a seafood salad or heated with stock to make a soup.”

The products are very popular also in Italy and in fact, during our visit, the line was packing ‘misto scoglio’, used by home cooks and restaurants to prepare seafood pasta.

RECIPE OF THE DAY

After quality control, each ingredient is fed into a vibrating trough which channels it to a belt system. Each belt feeds an elevator which takes the ingredient to the top of one of the Ishida weighers, delivering it to one specific section of the multihead. The multiheads are divided at the top into three sections in a ratio of 5:5:6, so that in combination they accurately weigh six different components into the mix.

The two ‘halves’ of each weighment are combined on a conveyor, which takes them to a thermoforming machine. Here they are delivered via a special distribution system into the newly formed trays, six trays being filled at a time.

The thermoformer can produce thermosealed trays, vacuum bags or, as in the case of the misto scoglio, skinpacks. Another option open to Cabomar is to use the conveyor system to transfer the weighments to a bagmaker instead.

“We originally bought the thermosealer intending to pack a single product,” recalls Enrique. “But the opportunity came up for a contract to supply a quality mix to a big retailer, so we looked into the equipment necessary to do this. Ishida and their Spanish distributor, CIMA, were very helpful and installation went smoothly.

“On top of that, they have reliably given us 99% accuracy, and when it comes to speed, we are only limited by the thermoformer.

“After eight years of hands-on experience with Ishida weighers, you could say that this is now the only make of multihead that we use. As regards support, we haven’t really had much opportunity to use it, but it has been reassuring to have CIMA’s strong expertise available to us locally. “